Sources of Wood and Woodland Management

HUNTERWOOD (HUNTERELM) has been supplying seasoned hardwood logs and firewood to the general public in this part of the East Midlands since 1991, the logs being produced from genuinely sustainable and renewable sources, locations and practices, mainly in the form of traditional woodland and hedgerow management carried out in the local region. 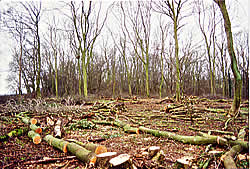 Winter coppicing work. The majority of the wood comes from coppicing and thinning work carried out during the winter in local broadleaved woodlands, several of which are ancient semi-natural sites and/or nature reserves owned by bodies such as the Woodland Trust, the Wildlife Trusts, or other private landowners. 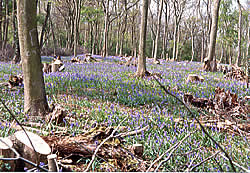 Bluebells in springtime after coppicing. The main aim of this sort of sensitive management work is to enhance the nature conservation interest of these woodlands, being highly beneficial to many plant and animal species which depend on these sites for their survival, whilst at the same time producing a wholly-sustainable and self-renewing source of wood for sale as fuel the following winter. 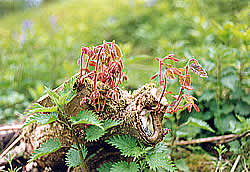 New Wych Elm coppice shoots. The whole process can generally be described as being `carbon dioxide neutral', as no trees are actually destroyed and killed, the intention being that all trees felled will send out new shoots from their cut stumps and regrow as coppice, and can be harvested repeatedly in this way in cycles of around 15 to 20 years or more. 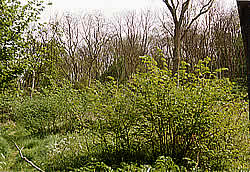 Wych Elm coppice regrowth after 3 years. Many of the logs produced in this way have come from ancient coppice stools that were alive in medieval times or earlier. The restoration of traditional management in these woodlands helps to rejuvenate these old trees, with the hope being that they will continue living on for centuries more.